Yesterday Laura suggested that we could come back home a day early, and that’s what we did. She gets more time with the kids this way, and our own bed sounded quite a bit better than one more night and morning at Comfort Suites. So even though the trip was great fun and we enjoyed it, we headed on home yesterday. 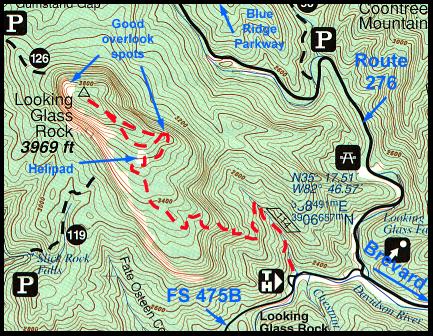 But not before climbing to the top of Looking Glass Rock. My legs were still a little worn out from Tuesday’s bike trek, so I was going kinda slow by the time we reached the summit. But it was worth it. The path opened up onto bare stone, sloping gradually to the cliff drop like a beach with sky instead of ocean. It may not have been the highest peak in sight, but standing on the brink, I was on the very edge of the planet. I felt the earth turning beneath me, scraping the sky as it went. It was exhilirating.

The four hour car ride home, while not exactly exhilirating, did give us a chance to sit still for a while, and by then I was quite appreciative of that. We made it home in time to tuck the kids into bed. They were happy to see us. Lydia seemed to have done way more than three days’ worth of growing up. She’s been bursting with Lydiacity today too, she treated us to a dance marathon. I’m so glad we didn’t miss her this morning.

We started today with a ride on the trails at Bent Creek, in Pisgah National Forest. The trail we were on climbed up along a ridge and eventually circled Lake Powhatan. It was nice and shady, and the path itself was double-wide and gravel.

I have no idea how high it was or how much the elevation changed over our ride, but it was a lot more than we’re used to. It was pretty challenging, but fun, we just walked the bikes when we had to. It was mostly just really long uphill stretches for the first half, and then of course much more downhill on the second half. My hand is actually a little sore from all the braking coming back down. It was great fun to do, the only drawback was that I was so focused on the road that I didn’t see as much of the surrounding forest as I maybe would’ve liked. The air did me good anyway, though.

After that we headed back to Biltmore. We had a little snack, did the winery tour and sampled a few wines, and explored the old farm buildings out there. After a quick change of clothes, we dined at the inn. Oh man, what a meal. My brain quivered from the sensations my mouth was sending it. Sweet pea and wasabi soup. Crisp frog legs with goat cheese cake, apricot marmalade, and bell pepper tapenade. Prosciutto wrapped pheasant breast with smoked onion potato puree, broccolini, and carrot jus. NOM. Not quite ready for dessert, we took a brief constitutional around the grounds while the sun started toying with the idea of setting. Then coffee and a peanut butter bananas foster sundae.

Laura and I are in Asheville, NC for a few days, while her mom and stepdad watch the kids. Apparently that’s going pretty well, the kids have reportedly been “little angels.”

Today we went to the Biltmore and toured the house and gardens. As a residence, it’s ludicrously opulent of course. It was cool seeing the servants’ areas and imagining all the bustling it must’ve taken to operate everything. Resetting the bowling pins for the family and guests had to be one of the more humbling tasks, I imagine. And I can’t imagine trying to cook for fifty or more people on a coal-burning stove.

Looking at all the luxury through modern eyes, it’s easy to feel judgmental. I do think this level of indulgence is excessive and selfish. But back then it was admired and celebrated even more widely than it is today. Granted, the estate has certainly stimulated the local economy, and the family was charitable beyond that. But my admiration was tainted as I looked around. It would be harder to achieve this place today, I think. I wonder how long it’ll be before we see a private residence to equal it. With the story of Michael Jackson’s death all over the television right now, I found myself wondering if his Neverland Ranch will still exist a hundred years from now.

We shuffled through the house with a river of people, but the gardens were comparatively empty, in spite of the gorgeous weather. The place is really vast. We’re going back tomorrow to see the winery and have dinner at the bistro there, after a morning of biking in the mountains. I would write more about today, but it’s bedtime now.